Despite these successes, the early warning network is stymied by a lack of funding that has delayed full rollout of the system.

The White House this week highlighted advances of the system by bringing together top scientists, politicians and emergency managers in Washington who marveled at how it could give residents as well as emergency officials and businesses precious seconds of warning before a devastating quake.

But behind the cheerleading, state and federal officials are battling over who should pay for the system, which uses hundreds of sensor stations embedded in the ground to monitor earth movement. Congress and President Obama have kicked in about half the annual $16-million cost to operate the system. But federal elected officials say state governments in California, Oregon and Washington should also cover some of the operating costs.

Those states have so far refused, with some officials saying the warning system should be a federal program. 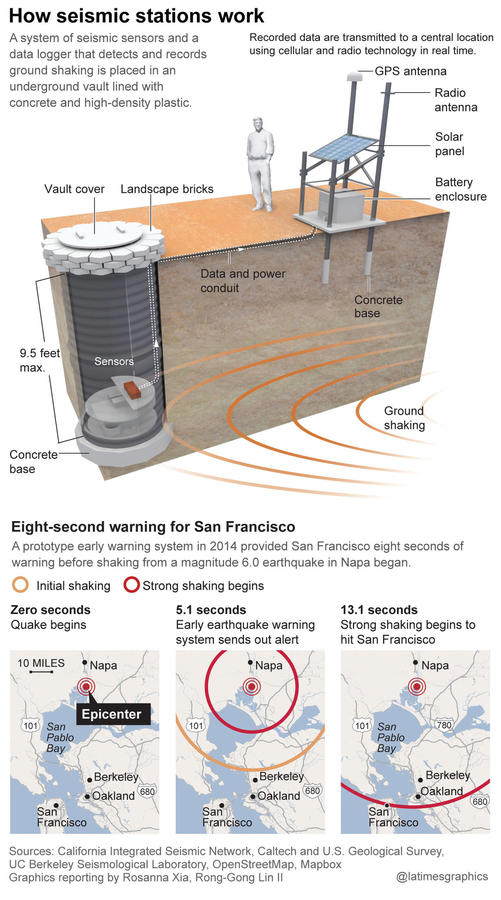 In 2013, a California law instructed the Governor’s Office of Emergency Services to identify sources of money for the system, such as federal funds, revenue bonds, local funds and private grants — but not the state’s general fund.

More than two years later, the office has not produced a report identifying the financing. Tina Curry, deputy director of the Office of Emergency Services, said her office is continuing the search.

H.D. Palmer, deputy director for the California Department of Finance, said this week that the state’s policy is to not use money from the general fund for the early warning system.

State governments in Oregon and Washington also have not committed funding to the warning system as part of their annual budgets.

Attention has focused on California because the state represents so much of the nation’s seismic risk.

“We really need the state of California to embrace this financially,” said Rep. Adam Schiff(D-Burbank). “The cost of the system pales in comparison to the fact that we can save lives with the system.”

Across the West Coast, the system has about 650 stations contributing to the early warning system, but 1,000 more are needed. A lack of sensors in the northern reaches of California means, for instance, that San Francisco could receive delayed warnings if an earthquake started near Cape Mendocino and barreled south to the Bay Area.

Scientists this week unveiled a new prototype for the warning system, which more government agencies and companies can now use for testing. Eventually, they plan to bring the warning system to mobile phones, computers and televisions.

The warnings would allow elevators to automatically open at the next floor before shaking arrives, tell surgeons to halt surgery, and slow down trains to decrease the risk of derailment. In Japan, one factory has figured out a way to secure noxious chemicals between the time a quake warning is issued and when the actual shaking arrives.

The total cost of building the system is $38 million, plus the $16 million a year to operate it. Officials said that if they could secure full operating funds, they could have the system going in as little as two years.

The system this week received a $3.6-million grant from the Palo Alto-based Gordon and Betty Moore Foundation, bringing their total contribution to about $10 million. But that money is going toward further development of the system, not operations on a regular basis.

Among the foundation-funded projects is studying how to put seismic sensors on the ocean floor along the Cascadia subduction zone. That area — west of California’s North Coast, Oregon and Washington — is capable of producing a magnitude 9 earthquake and tsunami that could wash away coastal towns, destroy U.S. Highway 101, obliterate 100 bridges and kill as many as 10,000 people.

Officials also announced this week that a branch of Amazon.com Inc. is providing a grant to better identify large earthquakes hitting the Pacific Northwest. Intel Corp., meanwhile, has launched an effort to rally private businesses to help develop and maintain the warning system.

These efforts were announced Tuesday at a summit held by the White House’s Office of Science and Technology Policy, which gave high-profile backing to the early warning system.

Still, this help only goes so far.

“We have a feasible plan on the table. But if people don’t want to fund that, then we just have to go back and see what could be done for less,” said John Vidale, director of the Pacific Northwest Seismic Network. “Is it really worth cutting the corners like that?”

Other countries have developed earthquake early warning systems after devastating quakes killed thousands of people. Mexico City has had a system since 1991.

After the 1995 Kobe earthquake killed more than 5,000 people, Japan moved forward on a nationwide system that now sends alerts through TVs, computers and cellphones. When the magnitude 9 earthquake hit east of Japan in 2011, many people in Tokyo, 200 miles away from the epicenter, had 30 seconds of warning that the shaking was coming. 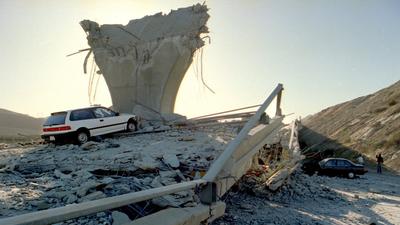 The early warning system works on a simple principle: The shaking from an earthquake travels at about the speed of sound through rock — slower than the speed of today’s telecommunications systems. That means it would take more than a minute for, say, a 7.8 earthquake that starts at the Salton Sea to shake up Los Angeles 150 miles away.

Seismic sensors stationed at the Salton Sea would detect the first shaking waves in as little as five seconds and blast a warning throughout Southern California. In this scenario, Palm Springs would have 20 seconds of warning; San Bernardino, 45 seconds.

“What people keep saying is — everywhere else, you have to kill 10,000 people before people realize, ‘Maybe we ought to implement the [early warning system], whatever it costs,’ ” Vidale said. “Until that happens, it’s not real to a lot of people.”

In Oregon and Washington, state officials said they are doing their part.

A spokesman for Oregon Gov. Kate Brown, a Democrat, pointed to the state’s purchase of 15 seismometers for nearly $700,000 in 2015 and the hiring of a state resilience officer to oversee seismic safety.

This is “direct evidence of Oregon’s recognition of seismic safety as a regional issue and willingness to work with other states to prepare the West Coast as best we can,” said Chris Pair, the spokesman.

A statement provided by the office of Washington Gov. Jay Inslee, a Democrat, said lawmakers have provided about $400,000 annually for seismic monitoring efforts at the University of Washington, some of which has indirectly supported work on the early warning system. To fully operate the system, “more federal funding will be needed,” the statement said.

John Schelling, who oversees earthquake, tsunami and volcano programs for Washington state, said the state could consider more funding once the system has moved beyond the prototype.

“If this continues to be tested and assessed for actual operational implementation in Washington, then I think it’s appropriate to see where funding could be applied,” Schelling said.

At this week’s White House summit, U.S. Secretary of the Interior Sally Jewell said completing the system on the West Coast is crucial because it then could be expanded to other states.